The launch of a new Insurtech fund – Brewer Lane Ventures – was announced earlier this month. Martha Notaras will be Managing Partner along with founder John Kim.

Martha was formerly part of the team at XL Innovate – investing in successful startups such as Lemonade, Cape Analytics and Slice and she has many years of experience in identifying and investing in technology companies in and outside of insurance.

Martha is also well known as a lively and informed presenter and panelist at insurance and technology conferences. Matthew talks to Martha from her office in California. The topics they cover include:

Matthew Grant: Martha - wonderful to see the news about Brewer Lane Ventures. Before we talk about that can we get a bit about your own background?

Martha Notaras: Commercial banking, investment banking, then I went to work in the media sector at Time and moved over to the DMGT (Daily Mail), where I got to build their business technology division.

One of my big investments in that era was Risk Management Solutions (RMS), which introduced me to insurance and the importance of data and analytics in insurance. Fast forward another few years and Tom Hutton was putting together XL Innovate as a VC fund.

Now I'm able to put all of that experience to use with Brewer Lane Ventures, focusing on fintech and insurtech with a broader view than we were able to take at XL Innovate.

What are your goals for the new Brewer Lane Ventures Fund?

One of things that's exciting for me is that the founder and managing partner I'll be working with is John Kim, who was President and Chief Investment Officer at New York Life most recently, but he has been investing for his entire career.

John has experience in the life, benefits and annuities market. My experience is primarily on the property and casualty. We're looking to knit that experience together into a more nuanced investment team, working together and making sure that we're getting the benefit of all the experience rather than creating any kind of silos. We expect to invest across the entire spectrum of insurance.

Brewer Lane is going to be targeting Series A and B investments. We’re interested in three areas: new business models, enabling incumbents, and data and analytics. We'll look at investing $5 to 10 million and leading on the right deals. There are companies that have started to get serious traction and John and I have known some of these for several years.

There's a convergence between fintech, insurance, life and health, P&C. So, presumably, it gives you more of a chance to get a broader exposure to more of companies?

We are looking for companies that use technology to improve people's lives. We are not an impact fund, but we are looking to do things like make insurance easier to use and reduce risk in people's lives with the goal of reducing the protection gap.

Presumably you are also looking for opportunities where previously risk was thought to be uninsurable because the data wasn't good enough?

A great deal of insurance analytics has been based on the concept that if you can tell me what happened over the past 20 years, I can evaluate that risk. But what we're seeing is, and cyber is a great example of this, risks that mutate and evolve and therefore the past is not a good guide for the future

Climate change is going to be another one of those risks. With the recent flooding and wildfires, it would have been hard to have predicted those events based on the past history alone.

You mentioned cyber and climate change as areas to look out for in your 2020 predictions. So, the people who can help define a new category of credible forward-looking risk assessment will be very investable.

Insurtech has identified where the traditional insurance industry has not been as incisive and detailed as it needs to be. Insurance companies have been good at collecting data, but they have been poor at storing data in a way that makes it usable and they have exacerbated that by storing it in silos.

The first step, and there are insurtechs that are going to do well out of this business, is getting the insurers to be able to access their own data and store their own data and own analytics in a way that makes them nimble and capable of learning from their own experience.

That ability for insurance companies to be able to extract their own data seems like a fundamental skill that every organisation should already be able to tap into. So, why do you think this has not been happening?

One of the issues is that the incumbent insurers have built themselves to move forward on a specific path, optimised around one set of offerings and one approach. Now, they're being faced with a market that's demanding other offerings and insurtechs are coming in and acting a more quickly than the incumbents can.

In his book "Misbehaving," Richard Thaler, a Nobel Prize winning economist, says that if you want people to do something, you have to make it easy. That is a fundamental concept that the insurtechs have really adopted. The incumbents have taken longer to realise that.

RMS was successful 20 years ago because there were a combination of some very large catastrophic events. Regulators then said companies needed to model risk and that was a real step change that drove the need for analytics. Are you seeing any dramatic shifts now that you expect to drive faster adoptions of technology today?

You would have thought that the Sony hack would have scared people about cyber and there are certain state actors that are doing some pretty depressing things. Some people and companies do feel they need to have cyber insurance, but I don't think people are thinking about that in a big enough way. I worry that, in the absence of a large catastrophic cyber loss, we are getting used to this and we're accepting it.

You’ve spoken in the past that you were frustrated by the speed with which you saw organisations adopting some of the new technology. Do you now see the pace picking up?

I see a big difference between where we are in 2020 and where we were in 2015. In the early days, insurers felt like they were ready to dismiss insurtech as a small hobby by tech geeks who didn't understand insurance.

There are now leaders in the insurance industry who are seeing that insurtech is no joke and they realise they need to get with the program, whether that is through acquisition or through developing their own digital capabilities. The winners will be the ones who look at both of those paths and create an organization that is no longer afraid of change.

You've got a busy life. How do you gather the information that you need to be successful?

What sets us apart at Brewer Lane Ventures is the networks we have built up over time. Finding people to trust, that are aware of trends in the market and who know the great entrepreneurs. Cultivating this network is what I spend a significant amount of my time on.

Finally, if people want to contact you, what's the best way?

We have a website and we will be out in the market a lot more, but the best pipeline in is Chris Downer. He's chris@brewerlane.com.

InsTech London is accredited by The Chartered Insurance Institute (CII). By listening to an InsTech London podcast, or reading the accompanying transcript, you can claim up to 0.5 CPD hours towards the CII member CPD scheme. 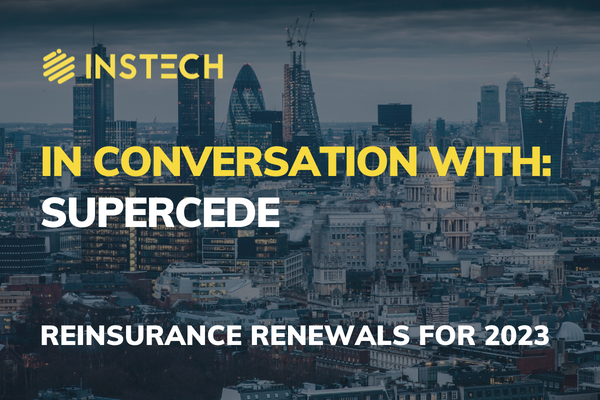 In conversation with Supercede: reinsurance renewals for 2023 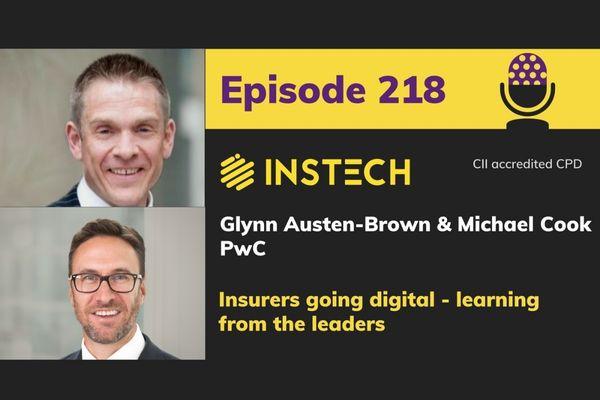 From Admin Systems to Ecosystems: Enhancing services through partnerships

Administration systems are emerging as natural hubs for digital ecosystems. They already provide the technology that runs many key administrative functions for their clients and have pre-existing... read more 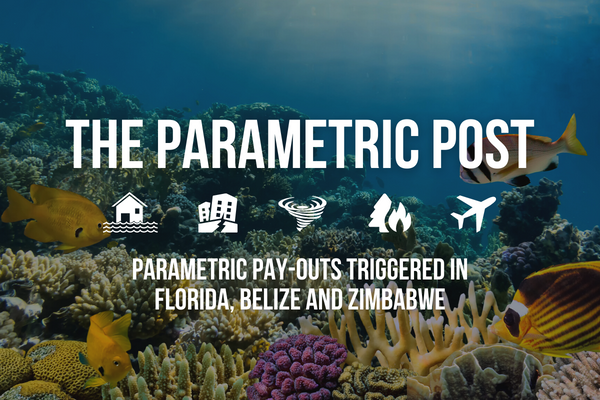 The Parametric Post, the only newsletter dedicated to parametric insurance.
You can sign up for free here.
The InsTech perspective… parametric initiatives at COP27
Climate • Humanitarian aid •... read more 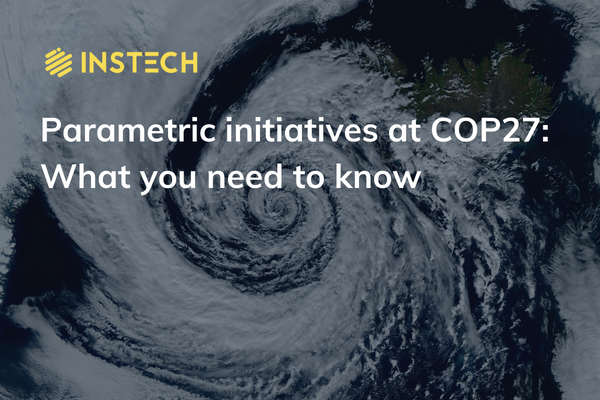 Parametric initiatives at COP27: what you need to know

A key theme of COP27, the United Nations’ 2022 climate change conference, has been financial support for the poorest countries most affected by climate change. The Intergovernmental Panel on Climate... read more 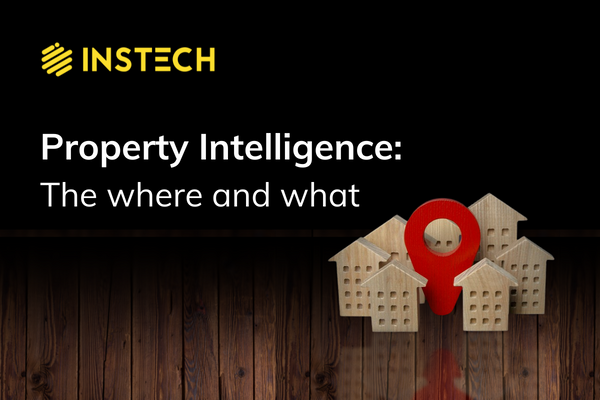 Property Intelligence: the where and what

Insurers now have a huge amount of choice of technology to help them make money, save money or satisfy regulators. But even the best technology is useless if we don’t know what it is we are insuring... read more